Having found myself in a smaller country and subsequently the home of smaller businesses I have come up against a large show stopper in the past when talking Cloud PBX.

Previously, if you wanted to add Phone System licensing to your users they would need to be licensed as at least E3. This has made adding dial tone to users on Business Essentials or Business Premium a really large jump in licensing cost.

In a nutshell, Microsoft 365 Business Voice is an add-on license that can be added onto Office 365 or Microsoft 365 subscriptions that include Microsoft Teams.

Currently Microsoft 365 Business Voice is available in Canada and the UK only, with more countries rolling out soon. New Zealand is rumored for sometime in 2020, keep an eye out for a formal announcement.

You can either purchase your calling plans from Microsoft or make use of a telco of your own choice by means of Teams Direct Routing.

This is great news for the New Zealand market!

Yes its true, coming early 2020 Teams will support the “direct guest join” capability. Essentially this simply means that you can join Zoom and Webex meetings from your Teams Room System. Basically clicking the meeting join button joins the participant from the browser based client.

Currently launching the browser to join is suppressed, but as Microsoft have worked closely with both Cisco and Zoom they are now close to releasing this for all to enjoy.

Looking at the details you will see an icon on the meeting entry on your Teams Meeting Room display indicating the meeting type (Teams\Webex\Zoom). If you ever had a play with “QuickLaunch” you may be familiar with this approach. 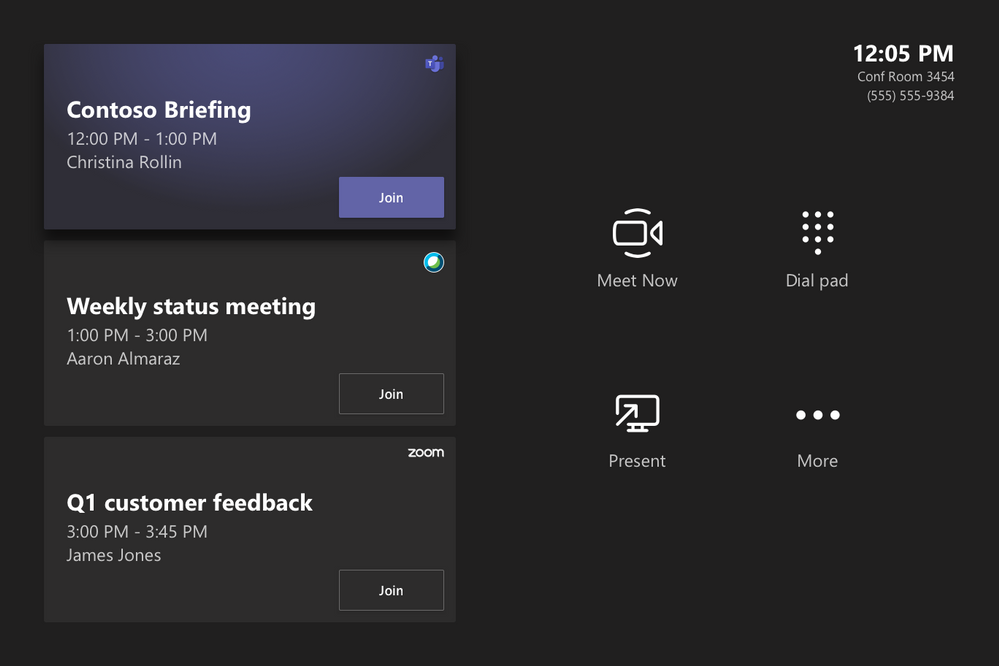 The announcement stated that the capability was to be available to a new generation of meeting room devices with embedded web technology. I am rather confidant that it will be available on all the official Teams Meeting Room devices. You can bet that there will be other vendors added to the initial list of supported web based meetings.

This issue was flagged as a Contact Center that’s unable to receive calls. Shortly after it was noted that users we where unable to join or create meetings using the “Meet Now” option within the SFB client and that the RGS service was failing to start.

All services were running with the exception of the Response group service. A quick dive into the event logs on the Front End Pool showed a number of errors as follows:- 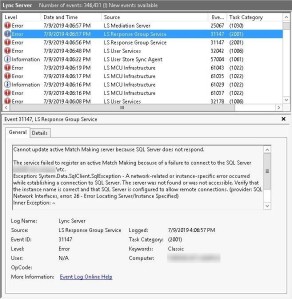 That explains why the Response Group Service wont start. What else we got here? 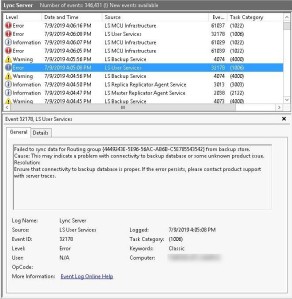 Cause indicates an issue with connectivity to the back-end database. Another SQL connectivity issue by the looks of it. Digging further, I also found a few other MCU errors like: 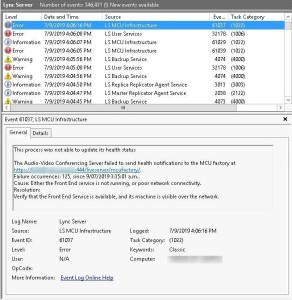 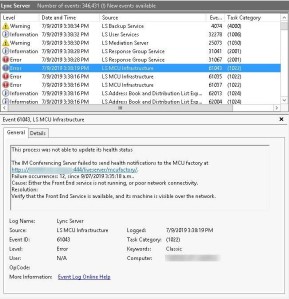 Almost missed this sneaky Information message (should be Error right..?). 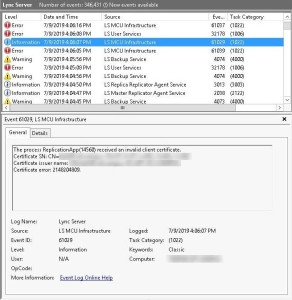 OK so here is what I have learnt so far:

My money is on certificates even though technically speaking the event log entry referring to this was informational. A quick look at the certificates proves that they all look fine and no expiring certs hanging around.

Double checked the trusted root CA and that too looks fine.

When checking the Trusted Root Certificates Authorities store I spotted something that wasn’t right. Usually the certificates in this store have identical Issued To and Issued By entries.

Anything that deviates from that, as far as I have experienced, generally prevented the RTCSRV service from starting. Not the case this time around.

Could this be the reason why I saw the Invalid Certificate warning before? Asked the on-site engineer what the deal was with these certs. Turns out they had been added by an engineer for some firewall trusts he was mucking around with.

Removed these dodgy certs, gave the RGS Service another start and boom, running! A round of tests to confirm and we are cooking with gas.

Folks! Seriously, there is no need to drop certs from the SAME CA as your server on the local store. They are from the same CA..

Lesson for today, if you don’t know what you are doing with certificates be warned. You could accidentally take out a Contact Center.