Just recently we have started seeing the Skype for Business installer option to “Connect to internet to check for update” actually find updates. Yay!

Hold on now, as this is where the issue begins..

On a new install (Enterprise Edition Pool) this week I though I might give it a bash and see how we go.

Seems we have found some updates, unfortunately there is no indication at this point as to which updates these are. 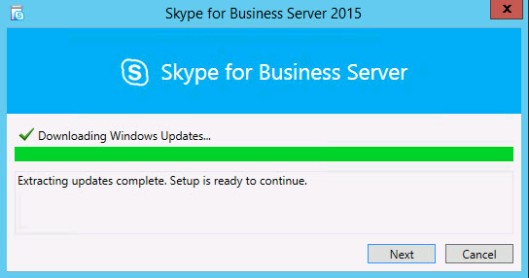 Next I ran through STEP 1 and 2

OK, so the log file alludes to the Apply Patch and it mentions OcsMcu.msi. I am beginning to suspect pre-install update wizard already.

Checking the log file we find the following errors:

So from these errors we can see that the Conferencing Server (OcsMcu.msi) Installed Version is expected to be from KB3149233. The second error calls out the version of OcsMcu.msi as 6.0.9319.259

Lets do a quick check to see what is actually installed. There are a few ways to do this. Great post by Tim Harrington at http://howdouc.blogspot.co.nz/2012/04/three-ways-to-determine-what-version-of.html on how to do this.

Since (at the time of writing) the latest KB (November 2016) is out and is newer than whats being reported here, I will use SkypeServerUpdateInstaller.exe as it seems I will need to run updates.

From this quick view it appears that some components have been updated BUT as you can see, the conferencing server update (OcsMcu) is on a much older version. The error log was expecting to find 6.0.9319.259 (July 2016)  but what we have is even older than that. That’s actually the original version on the ISO so it is safe to say that the Conferencing Server was not patched at all.

As a quick fix, thought I might try a sneaky update and hope that the aged OcsMcu would get patched.

Unfortunately the expected version is now mismatched and so the update attempt also throws an error:

In this case, since we are in the install process, we opted for uninstall and re-install. This time however we did NOT select the option to “Check for Updates” before running the install.

Came across a deployment with the following 2 issues:-

When trying to send messages to these “unknown” federated partners I got “This message wasn’t sent due to company policy”.

So why did I try to message a contact with a presence status of “unknown? Simply because the federated contact could see my users presence and send me IM’s, I was even able to respond to these IM’s although the presence was still “unknown”.

Taking a look at the users (client side) local event log I found the same error.

Event ID 11
A SIP request made by Lync failed in an unexpected manner (status code 80ef01f8).

We have 2 options here:-

Here is a little reason why you may want to avoid using the common sip.domain.com DNS name for your Edge Servers Access FQDN (only..). Internally the sip.domain.com record was generally configured to resolve to the front end pools, if we now need an internal SRV record for _sipfederationtls._tcp.domain.com then targeting this to sip.domain.com will simply get to the Front End Pool and not to the Federation point at the Access Edge FQDN.

Huh you say..that’s what I said too.

The Monitoring server reveals as follows:-

ms-client-diagnostics: 25; reason=”A federated call failed to establish due to a media connectivity failure where both endpoints are internal” Diagnostic ID: 25 states:- “A federated call failed to connect because a media path could not be established between the two internal endpoints. This failure can be caused by network performance issues affecting the endpoints or an endpoint being unable to use the A/V Edge Server. Correlation of such failures with individual networks, endpoints or A/V Edge Server can indicate potential deployment issues.”

The federated environment is as follows:-

Following the call setup using Snooper I can see the initial INVITE from the A-Party with 8 possible candidates.

Next we see the response from the B-Party in a 183 Session Progress message. The B-Party offers 5 possible candidates.

We should now see a message containing “a=remote-candidates” to identify the selected and tested candidate pairs.

In my trace, this is missing! Instead I find a BYE message with the following ms-client-diagnostics:-

The Diagnostic Header 25; reason=”A federated call failed to establish due to a media connectivity failure where both endpoints are internal”

I did notice the reference to LocalLocation=”2″; RemoteLocation=”2″; Having compared this to a successful federated audio call I cant say that this has any relevance since the same location ID’s were present.

Generally when the candidate negotiation fails we are facing a path issue. Be that blocked ports or routing.

I have come across this issue before see https://ucsorted.com/2014/01/12/media-connectivity-failure-when-both-endpoints-are-internal/

This time, however, the underlying cause of failed candidate negotiation was something I hadn’t encountered (yet).

My edge server was configured with external facing IP’s in the DMZ with NATted Public IP’s for each. Checking the NAT using whatsmyIP I discovered that the result was not what I expected. Cycling through all 3 IP’s on the Edge server I found that the routing was not symmetric!

Arrghh! Such a simple issue!

Asymmetric verses Symmetric simply refers to the paths that data takes on a round trip.
Symmetric routing – Send and receive traffic via the same Public IP.
Asymetric Routing will send on one IP BUT return traffic arrives from a different IP (this is no good for Audio and Video in Lync\Skype for Business)

Once the routing was corrected to symmetric the audio was successful.

This time the nominated candidate pair for Audio and video was present. Looking into the final INVITE from the Callee (B-Party) to the Caller (A-Party).

The Callee is stating that it will use candidate pair 3 to get to the Caller and that it plans to do so via the remote-candidate.

In response (OK Message), the caller states its intention to use the following candidate pair:-

Now the Caller states that it will use candidate pair 6 to get to the caller and that this will be done via its remote-candidate.

It seems to me that when the candidate negotiation fails the default assumption is that the endpoints must be internal. I can understand that reasoning since you would only expect to negotiate candidates so that you are able to traverse the Edge infrastructure.

However, it can lead you down the wrong path.