Arguably one of the most common Lync deployment mistakes is assuming that the SIP Domain is also the AD domain. I suppose the mention of the word domain here may be the misleading culprit. Perhaps the idea was to keep the SIP addresses identical to the logon names to comply with UPN (User Principal Names)

Traditionally (prior to Lync anyway) most SIP Servers would speak of a SIP Realm. This SIP Realm is now what is being referred to as the SIP Domain.

So what should you call your Lync SIP Domain then?

Why is using a domain.local not a good idea?

Firstly if you EVER want to extend your Lync deployment to include access from externally (be that mobility or federation) then you will have some rather major road blocks. Why?

Nope. In AD the SIP Address is known and associated to the users AD sign in profile, if the credentials are valid in AD and the associated SIP address is active then SSO works out the box…with one exception 🙂

Of course, the exception is when the user has already signed in to Lync using a user@domain.local SIP address. In this event the Lync Sign in details would have been saved in the registry, this will need to be removed to avoid user interruption during automatic sign in.

Whats the risk in changing the SIP Domain?

Generally I find that organizations come across the SIP Domain issue before deploying Enterprise Voice. Hopefully early in the roll out or adoption as the more users on Lync using the various features the more users may be affected.
With that in mind, consider the impact:-

Note
* The UM Auto Attendant and Subscriber Access SIP Addresses will need to be changed to domain.com as well.
** If Response Groups are already deployed then the SIP Address assigned to each workflow will be assigned to a domain.local address and thus will have to be corrected prior to removing the domain.local SIP Domain.
** If you change the SIP Address of any Enterprise Voice users that are assigned as Agents to a Response Group you will have caused an issue with the Workflow. Rather remove the user as an agent thn make the SIP Address change, followed by re-adding the user to the Group
*** WARNING – Any recurring meetings will become invalid if the previous Meet URL is removed. Of course this is

I didn’t say it was going to be a small piece of work..

You could reason that the change is too much to take on BUT know that it will need addressing sooner or later. The more dependent users become on Lync the harder it will become to rectify this later.

How do I move my Lync SIP Domain from a domain.local to a domain.com?

The process is more like adding another SIP Domain, then moving all the associated bits over. Followed by removing the old SIP Domain.

NOTE
Assuming that my current domain is neverland.local and I want to move to neverland.com

Fire up the Topology Builder and edit the deployment properties. Add the additional SIP Domain (domain.com) 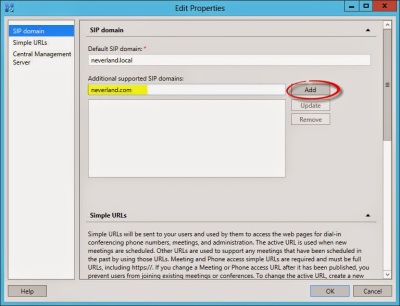 You will notice that the new meeting URL has been added automagically. The new SIP Domain can leverage the existing Dialin URL however in this case it will be dialin.neverland.local which wont do as its not accessible from external.

So now we have meet and dialin setup for neverland.com

Next change the external URL (this is the URL that hosts the ABS, GAL and a few other services. 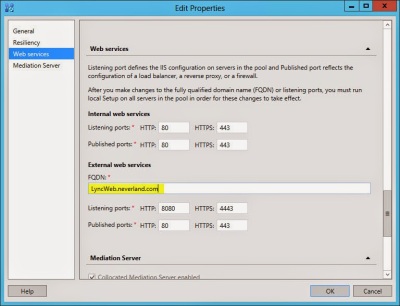 Go ahead and publish this.

3. Create the DNS Records for the new SIP domain (internal and external)

Basically this Powershell Command is run from each Lync server running IIS. It adds the IIS sites required by the new name spaces

6. Change the SIP Address for the users with the following Powershell command

Moving forward we want users to be assigned to the neverland.com sip domain by default. So Back to the Topology builder to change the default SIP Domain

WARNING
Removing the Old SIP Domain entirely is not recommended as there are several RtcApplications including Conferencing, Audio Test Service, RGS, CAA etc. which have SIP addresses assigned to them at the time of the initial configuration. These addresses are associated with the default SIP domain at the time. Changing the default SIP Domain in the Topology builder (or Powershell) does not update these Lync Objects.
For this reason it may be safest to add the old SIP Domain as an Additionally Supported SIP Domain.